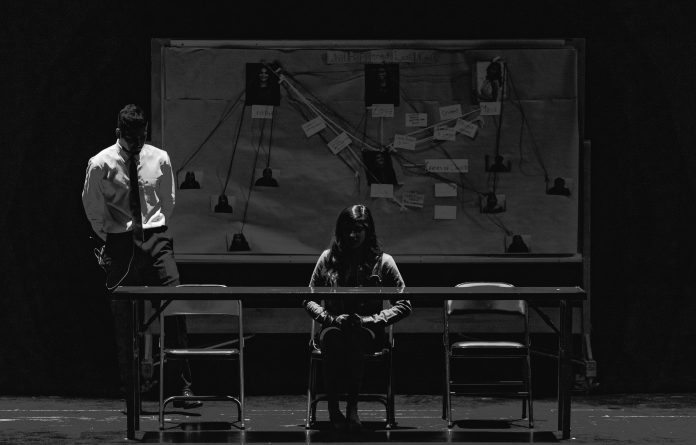 Once upon a time, in a small town called Mysteryville, there lived a detective by the name of Inspector Claws. He had been a detective for many years and was known far and wide for his remarkable skills in solving mysteries.

One day, Inspector Claws was presented with an intriguing case involving a missing diamond. It seemed that a precious diamond necklace had been stolen from the home of a wealthy family in Mysteryville. Inspector Claws was determined to solve the case and get to the bottom of the mystery.

The Inspector began by interviewing the family. He learned that a few days prior to the theft, a strange man had been seen lurking around the home. He was described as having a long black coat and a suspicious-looking fedora. The family also mentioned that they had seen the same man several times, but that he had never gone inside the house.

With this information in mind, Inspector Claws set out to investigate. He began by searching the vicinity for clues and visiting local pawn shops to see if the missing diamond had been sold there. After days of searching and questioning, the Inspector had still found no trace of the precious stone.

Finally, in a last-ditch effort to solve the case, the Inspector decided to question the strange man who had been seen lurking around the house. He followed the man to his home and knocked on his door. When the man answered, the Inspector asked if he had any knowledge of the missing diamond. The man denied any involvement, and the Inspector was about to leave in disappointment when he noticed something glinting in the man’s pocket.

The Inspector pulled out the object and found that it was indeed the missing diamond. It seemed that the man had stolen the diamond and was planning to sell it in one of the local pawn shops. Inspector Claws took the diamond and thanked the man for his cooperation.

With the mystery solved, Inspector Claws returned the diamond to its rightful owners. The wealthy family was grateful and thanked the Inspector for his hard work. The word spread quickly throughout Mysteryville of the Inspector’s success, and from then on, Inspector Claws was known as the detective who solved the case of the missing diamond.